If you wish to donate to our Parish Offertory Collection please click the 'Donate' button.

If you wish to donate to our Parish Offertory Collection please click the 'Donate' button.

Nidderdale was moulded by glacial action. The River Nidd rises on Great Whernside and flows down the valley, through Pateley Bridge, Ripley, Knaresborough and the Vale of York, where it joins the Ouse at Nun Monkton and, from there, the North Sea.

Until C12 much of Nidderdale belonged to the King and was used for hunting before the land was given to the monasteries, developed to supply wool, meat, dairy produce and for the mining of lead and iron.

After the Dissolution of the Monasteries, the land was farmed in smaller units and lead was mined until the end of C20. The River Nidd supplied power for a thriving flax spinning industry; stone was quarried extensively.

Pateley Bridge takes its name from Patleia – “The Path through the glade” – and was first mentioned in C12. An important river crossing and centre for farming and countryside industries, it is the capital of Nidderdale. 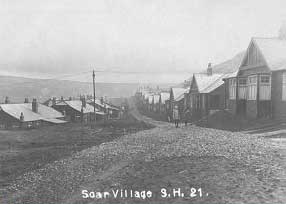 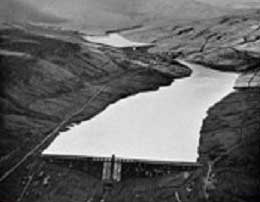 A small stone-built Gothic chapel built to service the needs of a mainly immigrant Irish population in the early 20th century.

In 1900, Bradford Corporation wanted to safeguard a water supply for the wool and dyeing industry, so they planned to build massive reservoirs in Nidderdale. A light railway was built from Pateley to Scar, along with a complete village to house the workers.

The earliest place of worship for Roman Catholics in the Upper Dale was at Angram. On 13th May 1906, a tiny iron chapel was opened to serve the workers on the project. Many of the 7000 strong workforce were Catholics and a priest from St Anne’s Cathedral in Leeds came every weekend to say mass.

Gable House, Pateley Bridge, is on the site of a turnpike house dating from 1752, and was occupied by the Faulkner family in the early nineteenth twentieth century.

About 1924, Fr. Herbert Hammond would cycle from Harrogate to Scar village to say Mass.  He told Mrs Margaret Faulkner, who regularly travelled on the milk train from Pateley Bridge to attend Mass in St Robert’s, Harrogate, that if he could find a place to offer Mass in Pateley he would gladly do so on his way to Scar.

The Faulkner family offered a room in Gable House and from then on Fr. Hammond held a Mass there every Sunday.  (Frederick Faulkner, although not a Catholic himself, prepared the sitting room for Mass every Saturday evening.)  The family allowed it to be used as the first meetinghouse in Pateley Bridge for Roman Catholics.

Later in 1928, Fr Hammond moved to Grassfield House, on the Ramsgill Road, where he had a chapel downstairs and a flat above. 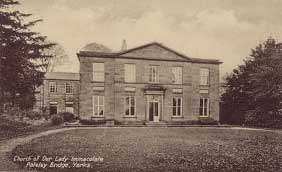 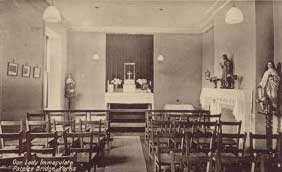 Fr Hammond planned to build a new church – he wanted it on the hill overlooking Pateley Bridge and near to the medieval church of St Mary. This was a grange chapel of Fountains Abbey, suppressed in 1539. The nave is roofless, but the tower has been restored.

In 1934, Mr M. Hawe of Hampsthwaite opened up Queens Grit Quarry at Blazefield specifically for the building of a new church on Panorama Way. The plot of land on the Ripon road was sold by Fredrick Sinclair Campbell for the sum of £418 2s 6d. During the construction a Golden Eagle flew from Greenhow and hovered over the site. Collections at Angram and Scar helped to pay for the building of the present church. 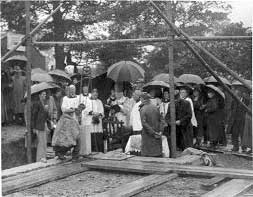 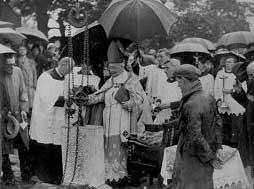 On the feast of St Theresa, 2nd October 1934, the foundation stone was laid by Bishop Cowgill, assisted by 4 year old, Pam Faulkner, then youngest daughter of Margaret and Frederick.

In September 1935 Fr Hammond performed the opening of the new church due to the ill health of Bishop Cowgill. The Blessed Sacrament was carried in procession from Grassfield House to the new church. 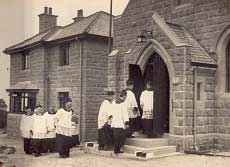 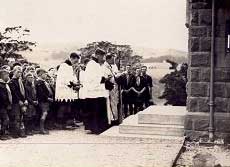 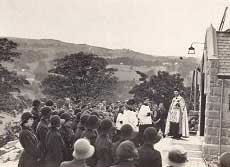 In October, Bishop Cowgill presided at a Mass offered by Fr Hammond. The sermon was preached by Canon Beazley of Skipton, and the server was Fr Thomas Ronchetti, whose brother was the architect of the church. 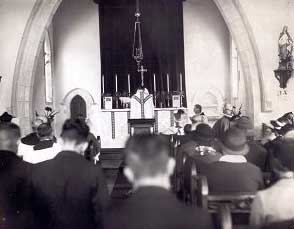 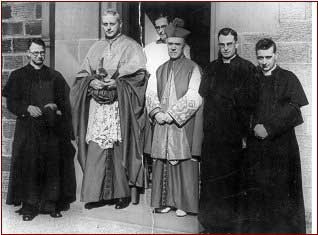 The main doors enter straight into the nave which has a central alley flanked on either side by wooden pews.   The nave is open to the roof and has simple painted walls which highlight the stone window surrounds. The interior space is broken by a wide two-centred moulded stone arch without capitals, marking the entrance to the sanctuary. The fittings are generally of simple wooden design, the sanctuary floor has wood parquet blocks. There are four modern glass light pendants of rectangular form with frosted and etched designs of the evangelists set within coloured glass margins. These were commissioned for the Golden Jubilee of the church.